It seemed like it took forever for us to find our current home.  My husband wanted something we could put some work into and get some equity out of as a result.  I wanted something that we could move into, which wouldn’t be a complete nightmare with two small children.  He wanted location.  I wanted more space.  We both wanted a garage and a fenced in yard.  I also wanted an upstairs laundry room.  I didn’t get that last one.  I’ll live.

Our house is not perfect and we compromised on some things to get others.  But, in the end, while it is not our “dream home”, I think we got pretty lucky.

It was a foreclosure, so obviously in need of some TLC.  This included all new windows (ouch) and some minor roof repairs from where a squirrel had made himself at home.  The bare bones were good though and someone had already put some work into trying to fix it up a bit, so it fit my criteria of being livable.

This process has been a mixture of fun, satisfaction, stress and frustration.  We have learned a lot.

Home renovations are 100% more difficult and take 100% longer with children underfoot, especially small children.  It is hard to get the large chunk of time needed to get the big projects crossed off the to-do list.  We basically ended up taking turns.  Dave would go to the house one day, I would go the next.  And once we moved in, I would pick a day to lock myself in a room to paint and he would do the same with outside projects.  But, the girls were pretty good considering, and Meredith has developed quite the love of tools.  She even sleeps with them sometimes.

You have to be prepared to make sacrifices.  I got up early on Christmas Eve to go paint the upstairs hallway because the carpet was set to be installed the day after Christmas and it just made sense to get the upstairs painting done while the floors were still plywood.

Fixing one thing will inevitably make you realize that you have to fix something else.

Don’t forget the outside.  Landscaping is more daunting to me than inside stuff.  And it’s just as expensive.  We are still slowly addressing the outside.  Since it was a foreclosure, the yard was neglected for quite some time. 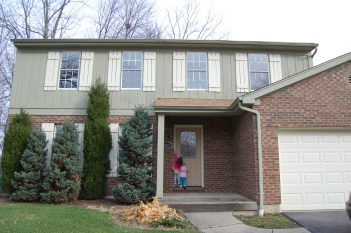 Be prepared for unexpected things to pop up.  Days after we closed on the house, there was a wind storm and one of the giant branches from a tree in the backyard fell onto our neighbors fence.  This was not how I wanted to meet the neighbors.  They were very nice about it and even said they would take responsibility for fixing it, but it was our tree at that point, so we just threw it on the house to-do list.

It takes time.  Even the things you think will be “easy”, aren’t.  It took months to finally get the right drawers shipped to us for the kitchen island we ordered and were installing ourselves.

You are capable of way more than you give yourself credit for.  I actually don’t mind painting walls, and have developed a pretty decent system for it.  Dave (while SLOW) is actually pretty handy and the fence gate he built from scratch, having never done it before, is impressive.  I am now very capable of using a stud finder, drill and laying laminate flooring.  Dave can hook up lights (though we did hire an electrician to run wires) and now adept at using a chain saw and wood chipper (see landscaping project comment above).

Some of the more impressive before and after shots. 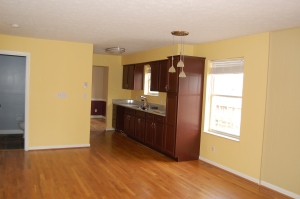 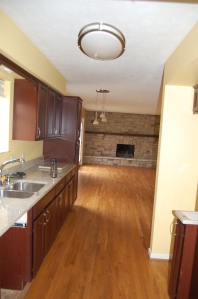 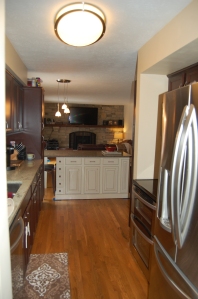 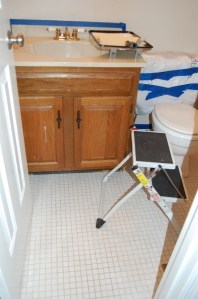 I don’t think home improvement is ever finished… but we have accomplished a lot.  I am pretty proud of us.

Posted in Uncategorized. Bookmark the permalink.

I am a married, working mother of two beautiful girls. I do not claim to be an expert at anything, but I am honest and try to keep a realistic and healthy perspective on life. I recently made a pact with myself to try to live as much in the moment as I can. I enjoy photography, cooking and seeing my children enjoy life. My life is hardly perfect, but I am pretty blessed.
View all posts by sarah »
← Rediscovering Meredith
Cream of Potato Soup →